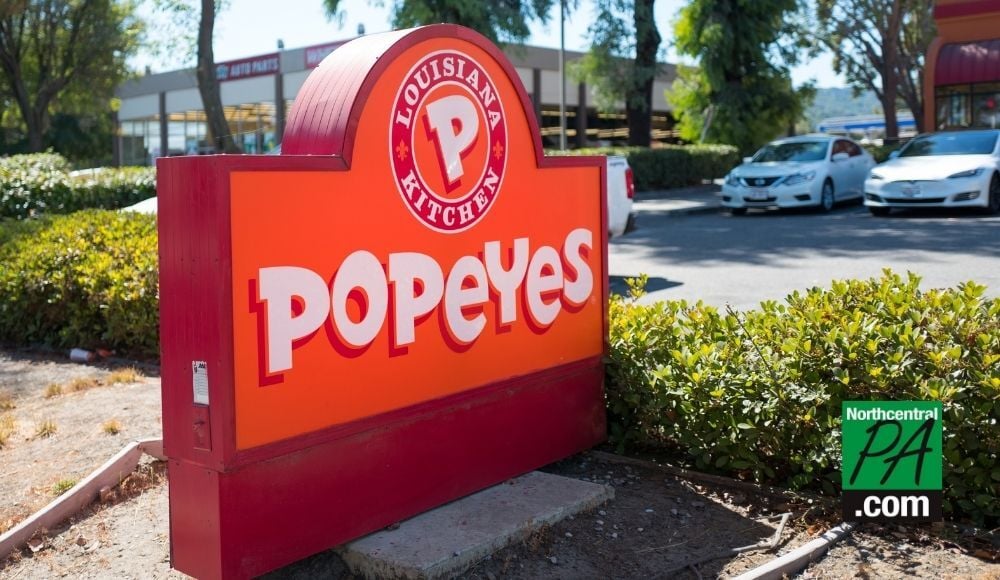 (File photo from February, 2021). A Popeyes Louisiana Kitchen restaurant will be constructed on this vacant lot at E. Third Street in Loyalsock Township. The fast food restaurant is expected to open in March 2022.

Pete Nicholson, representative for the franchisee PN Restaurants, recently signed a lease for the lot at 1713 E. Third Street, according to a press release. Construction will soon begin on the 2,400 square-foot restaurant which will include a drive-thru.

The lot, which is owned by local property owner John Schon, is located next to the former Crazy Tomato restaurant. The lot is currently vacant.

Business has been growing along the Golden Strip, as Hobby Lobby opened at the former Kmart in June and Kay Jewelers moved out of Lycoming Mall and into the former Payless ShoeSource at the Loyal Plaza. A Texas Roadhouse also is expected to open in 2022 at the site of the former Ruby Tuesday restaurant.

Chipotle has expressed interest in operating at 1955 E. Third Street at the site of the former King House Buffet Chinese restaurant, next to MedExpress. Loyalsock Township manager Bill Burdett confirmed representatives from Chipotle submitted plans earlier this summer, but no approvals have been granted yet. The plans will go to the township planning commission later this summer or early this fall, Burdett said.

Township officials and business owners have been concerned about an increase in traffic brought on by new businesses and drive-thrus on E. Third Street. The Dunkin Donuts store at 1900 E. Third Street has been of particular concern since they switched to a drive-thru only format last year at the start of the COVID-19 pandemic.

Burdett explained that E. Third Street is a state-owned road, and the Pennsylvania Department of Transportation takes the lead in working with developers to design an acceptable drive-thru access. Representatives from PennDOT and township officials have been working with the Popeyes franchisee to develop a longer drive-thru driveway that will not have an impact on traffic onto E. Third Street.

"Basically, it's going to go the whole way around the building," Burdett said.

Franchisee PN Restaurants currently operates Popeyes locations from Virginia to Massachusetts, according to a press release.

Popeye’s currently has more than 2,700 restaurants in the United States and around the world, according to the website. The chain began in 1972 with one restaurant in New Orleans, Louisiana. The menu includes fried chicken and seafood dishes with Cajun and Creole flavor profiles.

Currently, the closest locations to the Williamsport area are almost two hours away in Harrisburg and Wilkes-Barre.